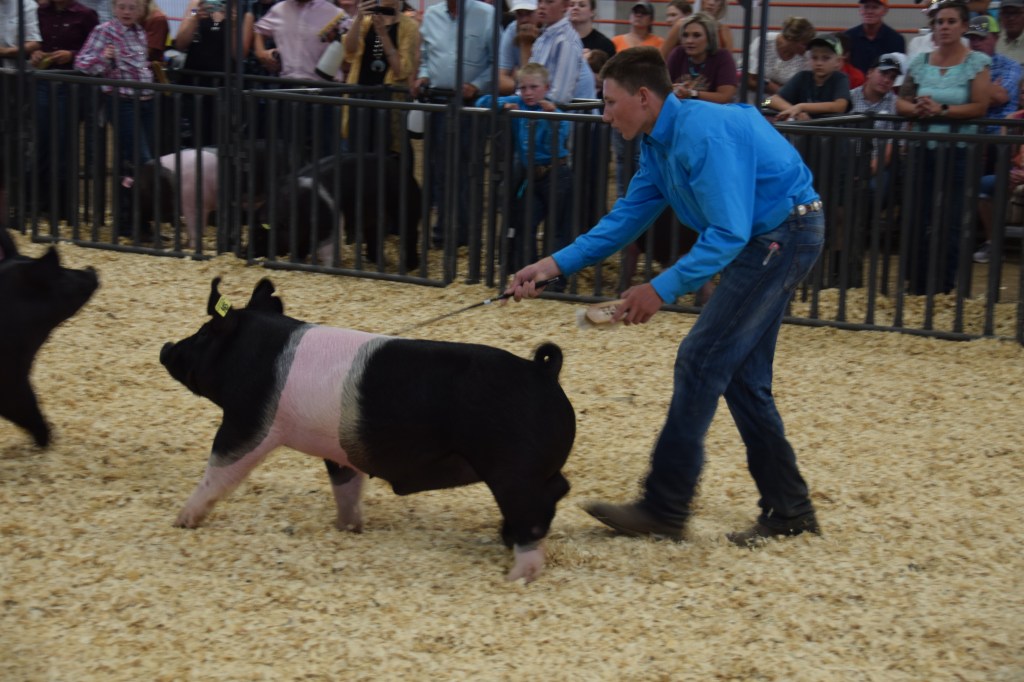 Carlson noted after the event that the two had competed a week earlier on another show, and he emerged victorious with Walker coming in second.

Ben Walker was in good company during the show, with siblings Wyatt and Molly also bringing home dark purple and light purple ribbons in their divisions. It was also a good day for Jalyssa Maker, who won the lightweight division champion ribbon and the top two spots in the middleweight division.

Judging the show was Kyle Baade from Nebraska. Baade is a graduate of South Dakota State University and he and his wife, Laura, and their three children own and operate Baade Genetics while maintaining an 80-head sow herd that specializes in raising pigs. purebred and crossbred showrooms and breeding stock marketed year round. They also maintain an on-farm stud using herd bulls for on-farm use as well as semen sales. Both Kyle and Laura Baade were active members of 4-H and the FFA when they were young.

Baade sits on the board of the National Swine Registry and as vice-chairman of the Hampshire Board. He is also a member of the Nebraska Pork Board.

During the Champions Campaign, Baade expressed his gratitude to the exhibitors and their families who supported them in raising and showing their pigs. He also thanked the volunteers who help make the fair possible, and offered his thanks for the opportunity to come and assess the cattle.

“I was told it was a good show and exceeded my expectations, not only from the cattle, but especially from the children, exhibitors and people behind the scenes,” he said. declared.

“From top to bottom, there were a lot more good ones than bad ones,” he said, “and that only leads to a positive experience for everyone. Everyone enjoys working with the good guys.